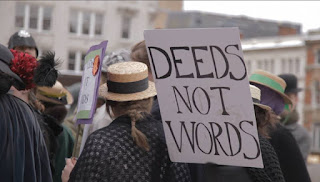 In 2012-13 I worked on an exciting project called Fight for the Right: the Birmingham Suffragettes. Funded by the Heritage Lottery Fund, the project gave an opportunity for young women living in Birmingham to explore the activities of both sides of the suffrage campaign, militant and non-militant, that took place in the city in the early 1900s. A group of young women from two local schools, Kings Norton Girls’ School and Waverley School, who were aged 12-15 during the project, investigated social and political change by looking at different ways of campaigning and protesting by women who wanted the right to vote. The young women involved in the project believed that the Birmingham suffrage campaigners were an important part of their heritage. While some of those involved had some prior knowledge of the suffragettes, often little is known or understood by young women about the histories of women involved in the campaign that lived and acted locally. Fight for the Right aimed to re-dress the balance by exploring women’s voting history from a local perspective, focusing specifically on the activities of the Birmingham suffrage movement between 1909 and 1914. While primarily a local history project, participants also considered social and cultural change within women’s rights today and explored ideas about voting and politics.
The project took place over a period of twelve months and was supported by the Heritage Lottery Fund’s Young Roots programme. A series of workshops were delivered by a small team of facilitators, including a project manager, local historians, a film maker, a drama practitioner and Education staff from Birmingham Archives & Heritage. The initial project plan was to use the knowledge gained through workshops and archival research to lead to the students scripting and filming a historical re-enactment film that interpreted the Birmingham story by focusing on the activities of both the suffragettes and the suffragists. What took place in Birmingham was not especially different to other major cities across the rest of the country but the project allowed the participants to research those events through local women and local actions, increasing a sense of connection between them and the past. The project aimed to explore the hidden stories that were not part of the students’ everyday learning, where the stories told often focus on a London-centric viewpoint concentrating on a limited number of personalities, for example, the Pankhursts and Emily Wilding Davison. While clearly important figures, the participants wanted to know more about what happened in their own local area. 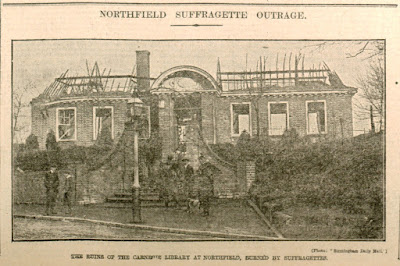 You can read entries written during the project on the blog: http://birminghamsuffragettes.wordpress.com/
We recently published a resource guide based around the project, aimed at Key Stage 3 pupils, which can be downloaded here: http://www.connectinghistories.org.uk/birmingham-stories/birmingham-stories-faces-places/
The film, Fight for the Right, directed by Sima Gonsai, can be viewed on Vimeo: https://vimeo.com/86719388