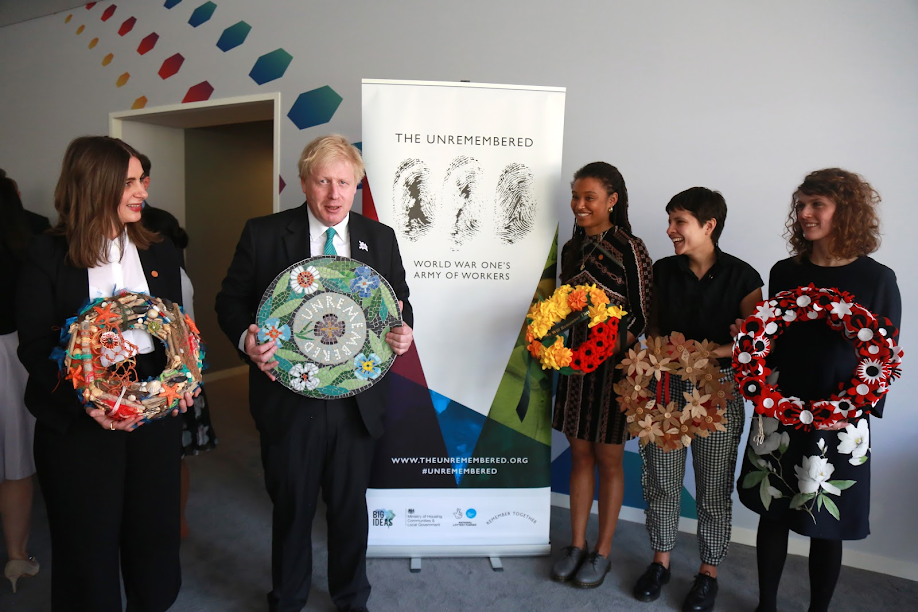 Field of Remembrance WW1
29 April, 201829 April, 2019 Marcus Belben Big Ideas Company, Commonwealth, Labour Corps, Lodge Hill Cemetery, The Unremembered
Our Unremembered wreath has been presented to the Foreign Secretary and Commonwealth Foreign Ministers at a lunchtime reception as part of the Commonwealth Heads of Government meeting along with nearly 100 others made by community groups across the UK.

The many delegates and diplomats included the International Minister for the Commonwealth Human Rights Initiative, the Minister of National Security for Bermuda and the High Commissioner of Barbados.

The whole school at Paganel Primary have worked with PHC to make felt flowers to create one large wreath to remembered the Unremembered Labour Corps,and in particular those buried at Lodge Hill Cemetery.

‘It’s been really wonderful here in the Big Ideas office as parcels have arrived, and The Unremembered wreaths have impressed everyone with their beauty coupled with the powerful and poignant statements you have made.’

The response to the wreaths has been amazing. 58 of the wreaths are currently being displayed in the atrium of the Ministry of Housing, Communities and Local Government in Westminster, London. The building also houses the Home Office, and ministers and staff from across the government departments have been able to view and engage with the wreaths.

Big Ideas have now partnered with the National Army Museum for a public display of the wreaths in May 2018, exact dates to be confirmed, including the dates our wreath will be there in case you would like to visit.

The wreath activity was a fantastic launch of our project, Field of Remembrance – well done our ‘Field of Archives’ team supporting making of flowers by all pupils from years 3 to 6 at Paganel School – please see our whole school assembly presentation for more details on the four soldiers buried at Lodge Hill Cemetery we researched who served in the Labour Corps.