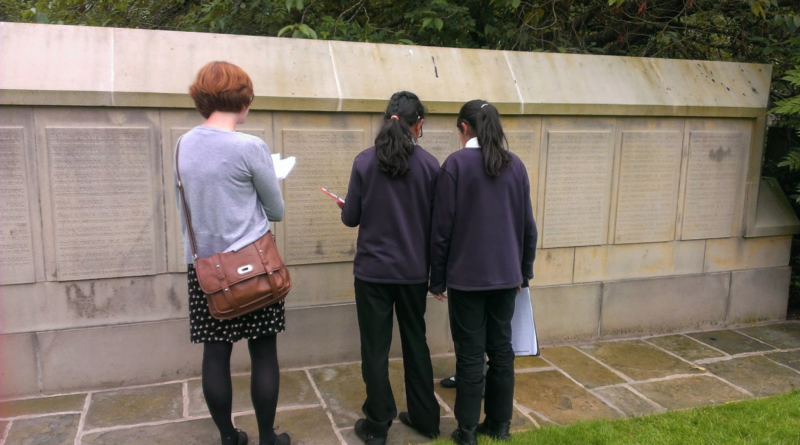 Paganel Primary School is unique in that it has its own archive and its Year 6 pupils are well versed in research, collecting evidence and making connections between events in history. The warfare project which took place in June made great use of these skills. The school is situated close to Lodge Hill Cemetery which has its own First World War memorial where victims of the war who died at the Southern Cross Hospital (located at the University of Birmingham’s campus at Edgbaston) are buried.

This formed the focus of this week-long project. The week began with pupils looking at archive material to establish what the pupils already knew about the First World War (quite a lot), what they knew about Birmingham’s experience during the war (a bit less) and what they would like to find out by the end of the week (what the experience of children was like, what food and clothing was like at the time, what weapons were used).

The following day the class worked in two groups, both visited Lodge Hill with question sheets relating to the men and women buried there while the second group carried out research using the Commonwealth War Graves Commission site. While some of the dead had been Birmingham residents before they joined the war or had joined the Royal Warwickshire regiment, we discovered that many had come from much further afield, from Australia and Canada for example, but also that there was a Maori soldier buried there. This helped the pupils appreciate the war in its global context, as well as the different regiments and the different jobs that could be done as part of the war effort.