Over the last few weeks we have been supporting Big Brum Theatre in Education Companywith their new WW1 project, Ties that Bind, which is supported by the HLF. We’ve been lucky enough to see previous WW1 productions by Big Brum and have been in awe of their creativity, passion and immense talent for working with young people in order to explore complex and challenging situations. Ties that Bind involves working with young people from schools in Birmingham and Wolverhampton to explore the experience of the young men involved in the First World War and their relationship to each other. This week I went with Matt and Richard from the company to Wolverhampton Archives, where I previously did some work, to explore a particular deposit that I hoped would be inspiring for the project.

Jesse Hill, a married man with two children from Peel Street in Wolverhampton, enlisted in the British Army in December 1915 and joined the 2ndBattalion South Wales Borderers regiment as a Private. The first time I explored this archive I was taken by Jesse’s ‘Soldiers’ Small Book’, issued to new recruits with information on how to prepare food and how to keep your feet dry, as well as instructions on how to greet soldiers of different rank and how to make complaints, invaluable for any new recruit with no prior experience of military life. The book told me Jesse’s age, height and the names of this two children, Jesse and Harold, but something else about the book struck me – a hole that rips through every page, with a clear entry and exit mark.

As I read further on I soon realised the terrible outcome, that Jesse had been killed in action in France, just a year after he was first sent to the frontline. Sometimes it’s hard to explain the power of the archive to people who have never visited one before but this is the example I often use: shivers that run down your spine from holding something so fragile and delicate, knowing that Jesse had this book in his pocket when he died; the privilege of being able to have such an intimate encounter with history, and with this man’s story. The other items are no less powerful and include letters and postcards from Jesse to his wife, Maggie, revealing the everyday experience of trench life and full of kisses for her and their children; a letter from a Sergeant Noble, Jesse’s commanding officer, informing Maggie of what had happened; the beautiful penmanship in the letter that Maggie wrote in response, thanking Noble for writing to her and agreeing with him that ‘it was best to tell me the truth than keep me waiting in suspense’ and her plea to Noble to tell her whether Jesse ‘was killed outright or wether [sic] he lived only for a few moments to enable him to say a few words about his home and family’. The letter was returned to Maggie, which suggests that she never received her answer. 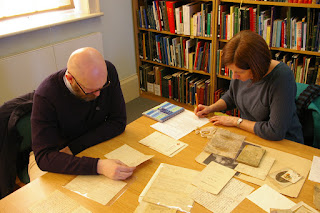 This is just one example of the importance of the archive in documenting the everyday lived experience of ordinary people and offers an invaluable resource in helping to connect young people with the past. Typically we often come away from the archive with more questions than answers and the case of Jesse Hill is no different. We do know however that there are surviving relatives who deposited the items at Wolverhampton Archives and we’re extremely grateful to them for sharing Jesse’s story, just as we are grateful to him for giving his life during this terrible conflict.
Nicola Gauld
Read more here:
https://wolverhamptonswar.wordpress.com//?s=jesse+hill&search=Gohttp://www.voicesofwarandpeace.org/portfolio/wolverhampton-city-archives/