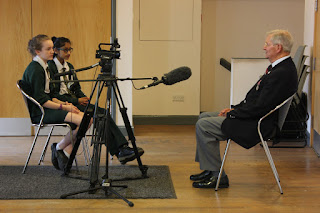 So here I’m sat at my desk, looking through scores of photos and hours of footage, wondering how I’m going to pull so much fantastic stuff together.  My job, you see, is to turn all of the lectures, interviews, workshops and explorations we have undertaken through our ‘Untold Stories’ project into a finished film for our launch on 13thSeptember.

I have rich pickings here. Workshops where we delved into the archive to discover magazines produced by invalided soldiers, photos of injured servicemen following facial reconstructive surgery, lectures on the sheer scale of organization required to ensure wounded soldiers were treated, genealogy workshops on tracing WW1 casualties, interviews with Korean war veterans, an interview with a serving Military Surgeon, explorations of Highbury Hall with a group of school pupils… it’s fair to say that we have been busy. 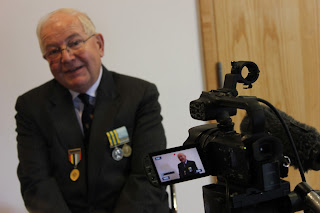 So perhaps for now I should just share some of my favourite snippets, and save the rest for the film.

My main involvement in the project has been working with pupils at Swanshurst School to teach them how to conduct Oral History interviews so that they are able to do their own interviews. Alongside former History Teacher, Doug Smith, and members of the People’s Heritage Co-operative, we ran a series of workshops to prepare the girls for interviewing war veterans during the school’s ‘Veterans Day’ event.

The stories that emerged over the course of Veterans’ Day really highlighted the variety of experiences. One gentleman spoke about his Grandfather being called up to serve at The Somme alongside his horse. Another interviewee highlighted a number of occasions when his father and comrades were injured in the trenches. Other interviewees spoke about more recent conflicts in WW2 and in the Korean War.

What was particularly striking was how much the pupils took away from the experience. Here are a few comments from pupils themselves: 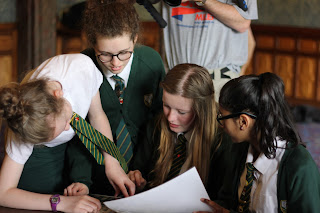 ‘You learn so much about where you live and what goes on that you feel responsible to continue this’.

‘I think that taking part in experiences like this can be even more informative than learning about it in lessons, because in this situation you’re learning more about actual people’s experiences’.

You can learn more about the pupils’ journeys, plus all of the many other aspects of research into the experiences of wounded soldiers from the First World War at our launch event at Highbury Hall on Tuesday 13th September 2016, 6.30pm to 8.00pm.