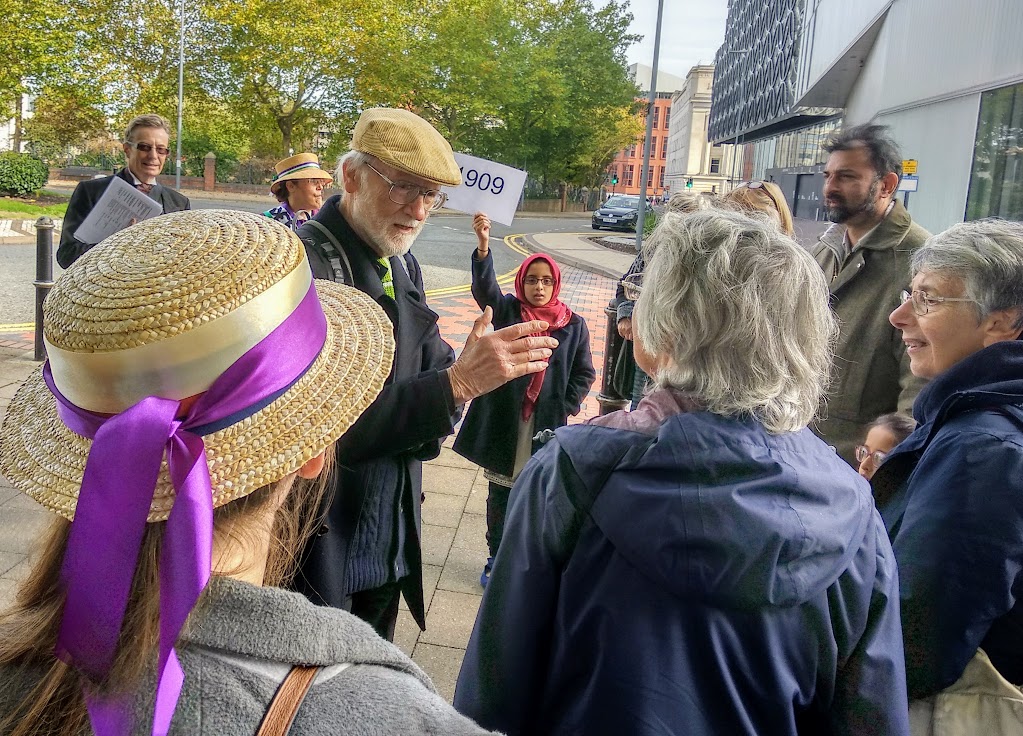 The Balsall Heath History Society led a historic walking tour around Birmingham City Centre exploring the city’s links to the suffrage movements of the chartists, suffragettes and suffragists throughout the nineteenth and twentieth centuries. The tour covered many important points in Birmingham suffrage history, from a re-enactment of Bertha Ryland’s destruction of a painting at Birmingham Museum and Art Gallery to a discussion about the burning of Northfield Library in February 1914, when Suffragettes left Christabel Pankhurst’s book at the destroyed sight with a note ‘To start your new library’. Whilst all of the tour’s stops gave an insight into the events that happened in Birmingham, what struck me as most interesting was a scene relating to demonstrations at Bingley Hall in September 1909.

With the Conservative Party Conference occurring just a few weeks ago at the ICC, the site where Bingley Hall stood until 1984, it seemed particularly relevant to learn about a political protest which happened on this very site in 1909. During Asquith’s visit to Birmingham that September, he called a meeting at Bingley Hall which excluded all women. In protest, several suffragettes climbed onto the roof and began to throw the slate roof tiles down onto the policemen on the streets below. The women were eventually arrested and taken to Winson Green Prison, which would go on to be another significant site in Suffragette history. When the arrested women arrived they went on hunger strike, a strategy which Suffragettes had recently started using. Winson Green did not release the women due to the hunger strike, and instead went on to become the first prison to introduce force feeding of arrested Suffragettes.