‘Untold Stories’ has unearthed a history which we in Birmingham can be proud of, in terms of medical treatment of  World War one soldiers, but also a history of prejudice and discrimination which is as relevant today as it was 100 years ago.

When we were designing the front cover of our learning guide, we took some time to work through the images we had before unanimously settling on a postcard featuring artwork by Walter Hayward-Young (1868-1920). [LoB: MS 4067 WW1 Postcards] 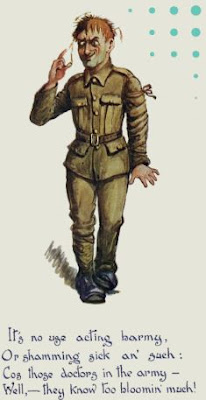 Many postcards were produced during WW1, typically as a means of communication, but also for propaganda reasons. This example, showing a visibly shaking soldier, demonstrates the ridiculing of men who were suffering from shell shock and the viewpoint that they were feigning illness to shirk their duty.

Walter Hayward-Young was educated at a local independent School, Warwick school. The First World War had a shattering effect on Warwick school and its headmaster, whose son Eric was killed along with 87 other ‘Old Warwickonians’ and two staff.  Walter Hayward-Young produced over 800 postcard designs, this one being quite out of character with most of his postcards, developed mostly for tourism.  Why did he draw such a harsh image of a soldier ‘shamming sick’?  And how typical was the attitude this postcard depicted across the UK during World War One?  What might you do with this postcard, or where might it be displayed?

The resources cover stories of more than 30 military, auxiliary and temporary hospitals, as well as the stories of the injured themselves; of Hon. Lieutenant George Henry Bonner who ‘was discharged with shell-shock, and he has suffered from it more or less ever since’: of ‘ex-private’ Jim Simmons preaching against the war and in favour of peace and campaigning for the rights and welfare of ex-servicemen.  We also look at the stories of those caring for injured soldiers, like ‘The Commandant’ – Mrs Amy Porter and Surgeon William Billington.  We looked at the relatives and the legacy, right up to modern day treatment of injured soldiers in Birmingham.

The ‘Untold Stories’ project has been completed, but the learning guide raises these issues and helps you explore and uncover stories of our wounded soldiers.